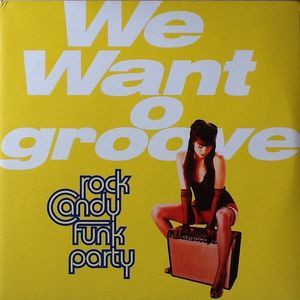 This quartet repurposes the jazz-funk sounds of yesteryear into a tasteful, eclectic mix, packed with memorable compositions and aided by the crystalline recording process, enabling the music to breathe amid great detail and depth. Featuring blues-rock guitar hero Joe Bonamassa

Rock Candy Funk Party is a production that sports a festive aura, We Want Groove are prophets of good cheer. The album emanated from Bergman and DeJesus' Groove Vol. 1 followed by live performances, ultimately leading to the We Want Groove aggregation. The musicians' collective resumes comprise gigs and performances with top rock, jazz and pop acts, spanning multiple genres, and their sensibilities and approaches to various musical platforms are impeccably transposed to disc.

The jazz-funk, soul brew is often given a bluesy touch by Bonamassa who is situated on the left channel while DeJesus is heard on the right channel, tendering a well-defined soundstage. In a loose sense the guitarists are role players, alternating between the jazz, funk and blues-rock idioms.

One of the more prominent examples of the retro vibe is "The Best Ten Minutes of Your Life," which could parallel a soundtrack from one of the old Blaxploitation flicks with inferences to the late, blues and funk guitarist Johnny "Guitar" Watson 1935 - 1996